The Cyprus Broadcasting Corporation (CyBC) is a legal entity governed by the Public Law and established in accordance with the Cyprus Broadcasting Corporation Law, Chapter 300A. The CyBC is governed by a Board of Directors, consisting nine members, who are appointed by the Council of Ministers for three-year term of service. The Senior Executive of the CyBC is the Director General, to whom in accordance with the Radio Broadcasting Act, ‘the Corporation delegates all of the responsibilities that are required to enable him to carry out his work efficiently’

Chairman of the the Board of Directors 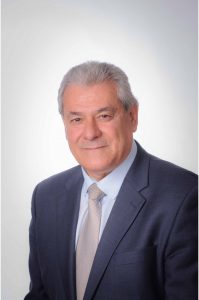 He has been a Business Consultant and Partner in Assurance Services at KPMG until his retirement in March 2021.

He is Chairman of the Board of Directors of the Cyprus-Ukraine Business Association of the CCCI since 2012.

He is appointed Chairman of the Board of Directors of the Cyprus Broadcasting Corporation (CyBC) from 1 August 2021.

Members of the Board of Directors

Gregoris Maliotis was born in Limassol in 1960. Following the completion of his secondary education in Paphos and his army service, he continued his studies in the United States where he obtained a BSSE and a post graduate MSSE from Purdue University in the field of Electrical Engineering, specializing in Robotics and Automation. He continued his studies at the Georgia Institute of Technology where he obtained a PhD in Electrical Engineering. He also holds a Masters in Business Administration ( MBA).

He has worked for many years abroad in major organizations, including Boeing Aerospace/ΝΑSΑ at the Kennedy Space Center. He has served as a Consultant to companies in the United States , as a professor at the Florida Institute of Technology, and he has been a member of the Board of Directors of the Cooperative Central Bank of Cyprus from 2010 – 2013.